By Heather Kokubun Missionary to Peru

For more than three months now, I have had one question on my mind more than any other. Of course, I have asked “Why? Why would God take a young man who loved Him with all of His heart, who served Him every day, who daily picked up His cross to follow Him, who preached the Word of God, who had a whole life ahead of him, and who could have done so much to further the kingdom of Christ?” But that’s not the question that I have asked the most.

The question I’ve struggled with the most is “What would Daniel say to me if he knew I was going through this? What would he tell me to do?”

Daniel had a bigger-than-life perspective on everything. He constantly amazed me with his wisdom, his deep knowledge, and his walk with the Father. Last year, through one of the toughest trials of my life, he helped me every step of the way.

One Sunday we returned home from church. We were both happy and laughing. We walked up the stairs and turned toward our door, only to see that it had been kicked in and hangers were scattered. Our home had been robbed! Many of our belongings had been taken, and all of our personal things had been ransacked. Our house was turned upside down that day, and so was my life.

But Daniel wasn’t phased at all. He knew I was struggling, so he didn’t say much until the following morning after breakfast at our hotel when I asked, “What in the world do we do?”

His response astounded me. He reminded me of Daniel in the Bible, who was stripped of all of his belongings but was also taken from his people to a faraway land. He was stripped of family, friends, culture, language— everything he had—and forced to live in another country as almost a slave. Daniel said, “This trial will change your life.”

I realized I could get bitter and upset. Hadn’t we given up enough to come to a third-world country? Isn’t it enough that we had given up family and friends, holidays and birthdays, modern conveniences…just to live here? Then the people we came to give everything to—took it.

I struggled; for months I struggled. Daniel shared one suggestion with me that helped me get through my hurt. He suggested that I do what Daniel from the Bible did: pray toward Lima three times a day and beg God to send revival to this country. Daniel lovingly reminded me that the Daniel of the Bible never forgot where he came from: he prayed three times a day toward Jerusalem. But he did not let his new location affect him negatively.

Daniel’s suggestion for me to pray was what had helped me through my last life-changing trial, so I suppose it is only natural that I should want to hear exactly what he would tell me as I am going through this trial.

On Sunday, my preacher, Dan Hubbard, preached a sermon about not giving up. I sat in silence, trying to hide the tears that streamed down my face. Something I did not know previously about grief is that it gets worse as time goes on. I somehow innocently thought that if I could make it through my husband’s funeral and burial service, I could make it. I am so glad that I had no idea then how hard it would be for me now. I’m so glad I was completely clueless, but at the same time, I feel so very ignorant for not realizing the intense pain that others have suffered for years, without my even once having the slightest idea that a human being could suffer so. Preacher spoke about not giving up on one’s marriage, children, and lastly on God. Toward the end of his sermon, I had my answer to the question I haven’t stopped asking since Daniel’s death.

In the midst of my suffering and broken heart, I can give everything I am for Him. Jesus’ life didn’t turn out “pretty” until He rose again. Jesus fought until His death so I could have eternal life. The least I can do is serve Him and love Him and live for Him until I die—no matter how hard, no matter what the pain, no matter how much I may suffer. Jesus did it. He didn’t turn His back on the cup of suffering that God handed Him. His answer was, “Nevertheless not my will, but thine, be done.” (Luke 22:42b)

To be human for a moment, I can’t honestly tell you how many times I’ve told God these past few weeks, “This isn’t what I wanted.This wasn’t how it was supposed to be. This wasn’t what I wanted with my story.” I’ve struggled. Bitter tears have streamed down my face as I have asked Him “Why? What did I do that was so wrong that I should deserve to have my dearest person on earth taken away from me?”

And yet, following Jesus’ example means I humbly surrender. I pick up the ugly, splintery cross He has lovingly chosen for me to carry each hour every day and say, “Okay, Father. Not what I want…but what You do want.” Life isn’t all about me anyway, is it? It’s all about Him. It’s all about His getting the glory He so rightly deserves. After all, isn’t He worthy?

“Jesus did the most He could do: He died for me. The least I can do is live for Him.” He never promised the road would be easy, but He did promise He would never leave me nor forsake me.

Pictured: Daniel surrounded by the children he loved. 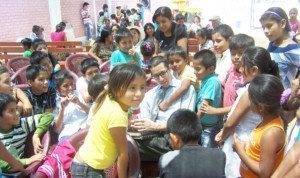