by Dr. Michael G. Sisson
(A long-time grade school principal of Hammond Baptist Schools, Dr. Sisson has been in Heaven for many years.)

Back in the fifteenth century, in a tiny village in Nurnberg, Germany, lived a family with 18 children. In order to keep food on the table, the father worked 18 hours a day in the mines.

Two of the children, Albrecht and Albert, showed a remarkable artistic ability from a young age. Their dream was to someday attend the famous art academy at Nurnberg. But their childhood dreams soon gave way to life’s realities that their parents would not be able to send either of them to the academy. Night after night, the boys would lie in their beds and talk, trying to come up with some way that they could attend the school and help develop their budding talents. As teenagers, the boys came up with a plan. They would toss a coin. The loser would go down into the mine, and with his earnings, he would support his brother while he attended the academy. Then in four years, when the winner completed his studies, he would support the other brother at the academy.

They tossed the coin on a Sunday morning after church. Albrecht won and went off to Nurnberg to study at the famous academy. Albert went to work in the mine, and for the next four years, he supported his brother. He paid all of his fees and living expenses.

Albrecht showed an amazing ability and was soon surpassing his professors in the quality of his work. Four years passed. Albrecht became a well-known artist, and Albert spent 18 hours a day laboring in the dangerous mines.

Upon his graduation, Albrecht returned to the little village. His proud family held a festive dinner to honor their now-famous son. During the course of the meal, Albrecht rose to give thanks to Albert. As he closed his remarks, he said, “Now, brother, it is your turn. You can go to Nurnberg, and I will take care of you.”

All heads turned toward Albert, but instead of a smile, they saw tears flowing down his cheeks. He slowly lowered his head and began to say, “No! No! No!” Albrecht moved to his side and said, “Oh, yes! A deal is a deal. Four years ago, we tossed the coin and I won. You have kept your end of the agreement, and now I intend to keep mine.”

Finally Albert looked up, holding up his hands with the palms together. He said softly, “No, brother. I cannot go to Nurnberg. It is too late. Look closely at my hands. Look what four years of laboring 18 hours a day has done. Every finger has been broken at least once, and lately I have been suffering from arthritis so badly that I can barely hold the pickax in the mine. There is no way I can ever hold a paintbrush and make delicate lines.”

Almost 500 years have passed since that day. Today, Albrecht Durer’s masterful portraits, silver-point sketches, charcoals, woodcuts, and copper engravings hang in every great museum in the world, but the odds are that you, like most people, are familiar with only one of Durer’s works. You may even have a reproduction in your home.

One day, in order to pay homage to Albert for all that he had sacrificed, Albrecht painstakingly drew his brother’s abused hands with palms together and fingers stretched skyward. He called his drawing, “Hands,” but the world almost immediately opened their hearts to his great masterpiece and renamed his tribute to his brother, “The Praying Hands.”

The next time you see a copy of that famous painting, take a second look. Let it be a reminder of the brother who sacrificed for another. Let it also remind you that no one is self-made. No one ever makes it alone. Somewhere someone has sacrificed so another could achieve. 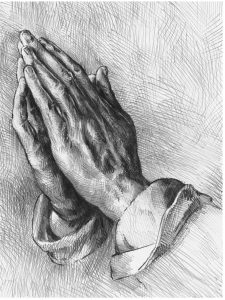