Skip to content
Home/Hurts, Motherhood, Relationships, Trials/When I Wasn’t There for You, He Was
Previous Next

When I Wasn’t There for You, He Was

As we are growing up, we all learn by example, whether it is by a good one or poor one. My sweet mother was not saved until late in her life, and what I learned from her were many things that I didn’t want to teach my children.

From an early age, I was totally on my own. My parents would tell stories of me as a young toddler going out and visiting with the neighbors. Since we lived on a military base, my mother apparently thought it was safe, and so she would put me outside, and I would go to various houses and ring their bell and stay with them, sometimes all day. I never had any nighttime ritual of story reading, cuddling, or prayer. My parents would show off my independence when they had partying friends over by saying, “Glorianne, take your brother and put him in bed, and you go to bed right now.” This was when I was three years old and my brother was one!

All summer long my brother and I would be on our own from early morning to dusk, frequently staying the whole day at the playground. I learned total independence and self-reliance. When I was five, I remember teaching my brother what we would do if the house were on fire. I chose a window and had him practice jumping out first, and then I would follow.

I also learned not to become attached to “things”; around Thanksgiving every year my doll would disappear, and when I asked, I heard, “What? That ratty old thing you drag everywhere? I have no idea!” Then at Christmas Santa would bring me a new doll, and I was told, “Try to keep this one clean and neat!” Eventually, much to my mother’s delight, I would just leave my new doll on the shelf in my room and never play with it.

I had to make my lunches to take to school, dress and care for myself totally without any help or guidance. When I was 12, I began to babysit for other families almost every weekend, and so was gone from home and on my own even more. In junior high I remember other girls laughing at me for my disheveled appearance, for I had slept with my hair in a ponytail and hadn’t re-combed it.

As a teenager, I was totally independent and only had to be home by my parents’ midnight curfew. Other than insisting I go to church each week, my mother imposed no other requirements on me. She was a fastidious homemaker with a literally spotless house and good dinners, but she never did teach me to cook, clean, sew, do laundry or any other household duties, saying, “You might do it wrong.” She preferred I stay away, and she would do the chores.

So, at age 18, I was a very self-sufficient, independent, lonely girl when the Saviour found me. My church had stressed good works for salvation, but when I heard the verse, “For by grace are ye saved through faith; and that not of yourselves: it is the gift of God: Not of works, lest any man should boast,” I was gloriously saved! Then the Holy Spirit had a major job teaching me to rely upon the Lord and not myself for everything!

Through her actions, my mother taught me that no one has your back, and you have to obtain everything in life by yourself; you are your own scriptwriter for your life, and whatever you achieve is because you alone have attained it. All of these concepts are contrary to Scripture and were totally ingrained in me. But now I am a new creature in Christ, and with His wonderful help through His Holy Bible, I can be the Godly mother and grandmother He wants me to be.

A few years after my mother accepted Christ shortly before she became ill and died, and she was talking with me and said, “I see now that God has had His hand on you. When I wasn’t there for you, He was.” 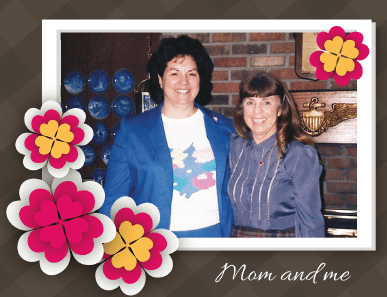